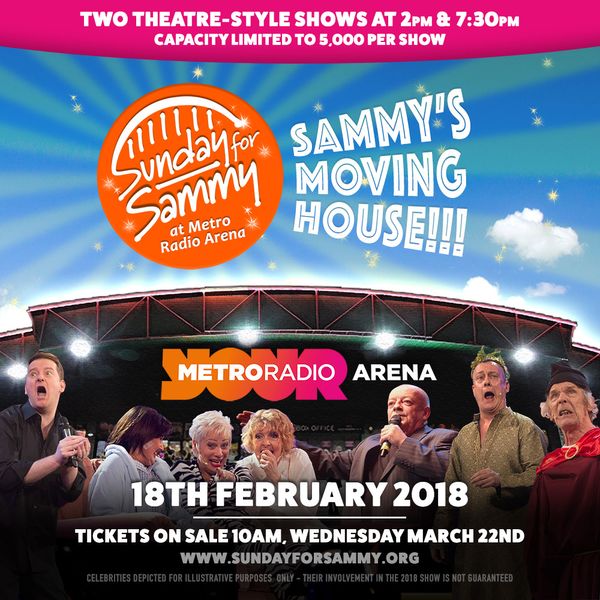 Sunday for Sammy, unofficially known as the Geordie Command Performance, will return to Tyneside on Sunday 18th February 2018 but this time at a new venue. The show, first held as a tribute to Geordie actor Sammy Johnson in 2000, has been presented at Newcastle City Hall for nearly every performance. However, in recent years the demand for tickets has far out-stripped the supply. In 2016 the two spectacular shows sold-out in a day and thousands of disappointed fans couldn’t get tickets.

In 2018, Sunday for Sammy will re-locate to Newcastle's Metro Radio Arena for two theatre style performances. 5,000 tickets will be available for each show, more than doubling the available tickets compared to previous years.

Chairman of the Sunday for Sammy Trust Tim Healy said,

“I spend a lot of time in the North East and people constantly ask me how to get tickets for Sunday for Sammy. The show has become so hugely popular that all available tickets are snapped up as soon as they go on sale. By moving the show to a larger venue we can give loads more people the opportunity to see the show while ensuring our continued support for the talented young performers from our area that need a helping hand.”

Since the first Sunday for Sammy in 2000, young local performers have benefitted from over £400,000 in grants to help with their professional development.

Catherine Dryden, from Chester le Street is a 3rd Year Student at RADA and was part-funded by the Sunday for Sammy Trust.

“Sunday for Sammy is helping me to get through my final year at RADA. My course covers six days of the week which doesn’t give me the opportunity to work to help pay the bills and the cost of being in London. Without their support, I couldn’t have carried on. They have given me the helping hand I need to further my professional career in drama.”

“Sunday for Sammy is such a wonderful event and we are very excited to be part of its continued growth. The event generates such excellent support for the local community and we are sure the two performances will once again be a success in it's new home at the Metro Radio Arena”

The show’s producer, Ray Laidlaw urged everyone to book tickets as soon as possible.

“Sunday for Sammy is unique; no other part of the country has an event that celebrates its regional popular culture on such a scale while supporting the next generation of performers.

“It’s an amazingly popular show and in recent years every performance has sold out within hours of the tickets going on sale. We get a huge number of messages from people telling us that they’ve tried to buy tickets but have been unsuccessful. That’s why we’ve doubled the capacity by moving the show to the Metro Radio Arena. However, we anticipate ticket demand to be greater than ever and we’d hate to see anyone missing out. The message is simple – lots more tickets available but if you want to be sure of being part of Sunday for Sammy 2018 then don't delay, buy your tickets early.”